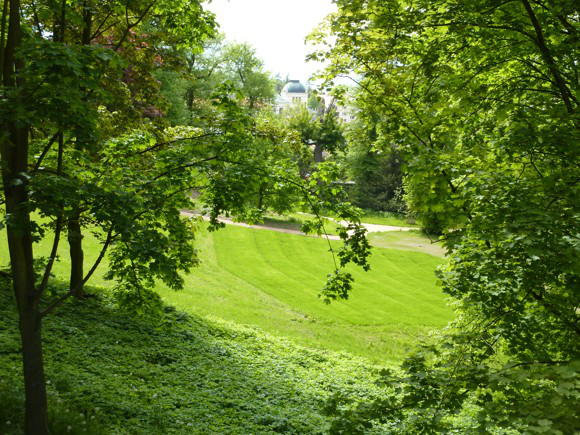 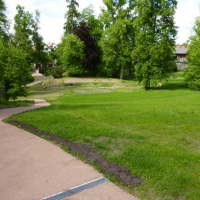 Litomyšl Castle has always been surrounded by a garden. Sources from the end of the 16th century say that on one side of the castle there is an ornamental garden (probably today's French) and on the other two sides there is a garden surrounded by a wall and old fruit trees. About 1803, the garden was arranged in the English style, there was a small temple, aviary, water reservoir and artificial waterfalls. In 1808, a statue of a reclining lion was erected on an artificial hill, which is still here today. After 1945, the castle belonged to the state and in 1955 the construction of the natural theater began. According to the available historical data, the park has always been designed in a natural landscape style. The solution of the architectural studio HŠH thus removed inappropriate modifications, relaxed the view of the main landmark of the park, which is the castle, and "opened" the streams, which again lead along the surface. The water route maximally respects the existing trees and is also emphasized by the fact that the riverbeds are made of artificial material. The routes of the paths and the terrain of the park are based on historical map materials. As part of the revitalization, trees and stands in poor health were removed, or trees damaged - especially by the storm from 2008. The trees remained healthy and a professional cut was made in some of the damaged ones. New, mostly domestic tree species were planted - linden, alder, willow and maple. A total of 11,065 plants were newly planted.