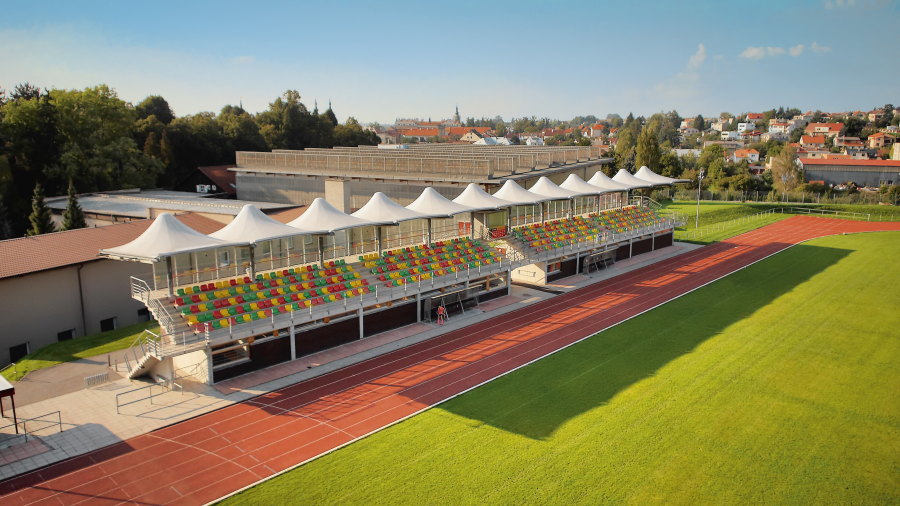 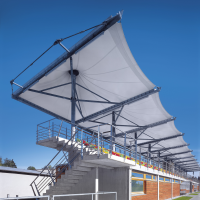 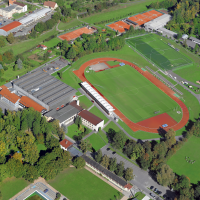 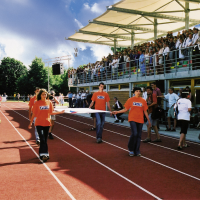 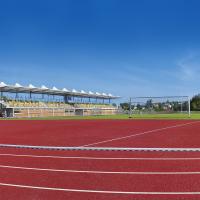 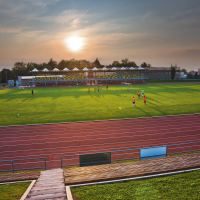 Already in 2002, the city stadium received an artificial surface polytan "M", new benches, steps (grandstand on the slope), railings, irrigation of green areas. The next phase of the completion of this area was the construction of the grandstand building, including the roof. It also included the reconstruction of roads at the stadium, the construction of a throwing ring, the addition of a grandstand on the slope, railings between the individual fields, the reconstruction of fencing and the construction of the Olympic flame and flagpoles. The grandstand on the lower field creates a comprehensive solution for the placement of spectators for football fields and athletic disciplines, as well as social facilities for athletes and spectators. The ground floor of the grandstand is divided into two parts by the main access to the playground. It contains 6 locker rooms with sanitary facilities, refreshments for visitors, the referees' office, storage facilities, an infirmary, sanitary facilities and a garage for equipment maintenance. The grandstand is accessible by stairs on both sides and in the central part, which is connected by a ramp to the existing sports hall. It is covered with a textile fabric, which is carried out by a steel structure and switched off by rods. The capacity of the grandstand is 520 seated and 104 standing spectators. Reconstructed sports facilities are used for football, basketball, volleyball, athletics (including long jump, triple jump, high jump and pole vault, shot put, javelin, disc and hammer) and of course for physical education of schoolchildren. The architectural solution of the reconstructions, as well as of the newly realized buildings in the Černá hora Municipal Complex, comes from the workshop of the architectural studio Burian - Křivinka.