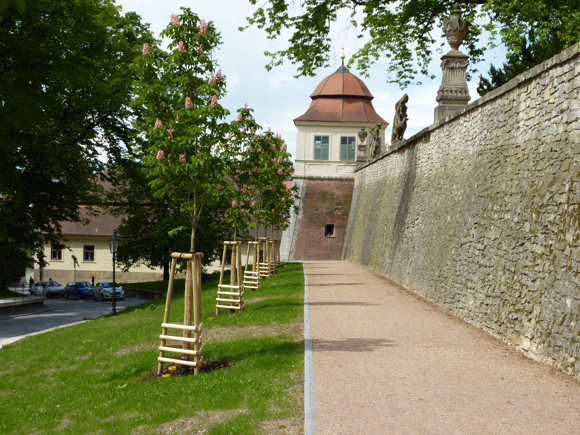 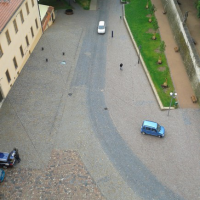 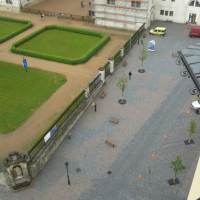 The castle road accepts the right arch of the historical road. This is further enhanced by the placement of a new concrete pavement with a one-sided railing. New paved paths were created here. All healthy, mature trees have been preserved around the monument of Alois Jirásek. The connection between the city center and the castle hill has been strengthened, which is of irreplaceable importance. Alley of Philosophers - the path under the high wall of the castle garden hides the secrets of Philosophical History. Its poetic charm was enhanced by the newly made threshing surface and the new planting of mature trees. The road leading around the castle was elevated to a square. The monumental space is controlled by the facade of the Piarist Church of the Finding of the Holy Cross, the facade of today's museum (former Piarist grammar school) and the baroque facade of the castle brewery by F. M. Kaňka. A new original unmistakable spirit of the urban space was imprinted on this locality with a new paving and a new arrangement in front of the museum, which finally gives the full sound of the quality of the belonging Baroque buildings. The author of the revitalization proposal is Josef Pleskot.