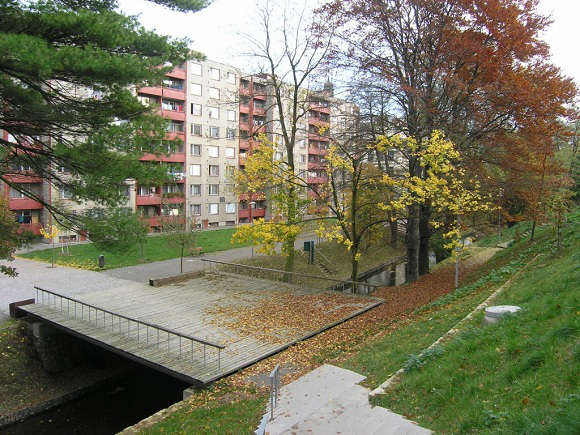 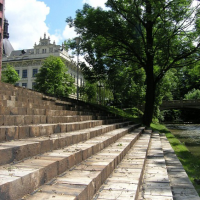 In the autumn of 2001, the first stage of the reconstruction of Comenius Square was started. This step was preceded by a competition of three architectural offices, to which the City of Litomyšl commissioned the elaboration of the project. The commission, which included not only members of the city council, the professional public and representatives of the Ministry for Regional Development, but also citizens of the housing estate, announced the winning design of the AP ateliér Pleskot architectural office project.

The aim of the winning design by architect Josef Pleskot is to integrate a basically satellite housing estate in the middle of the city with the historic city and to deconcentrate the existing central car park. The analysis of architect Pleskot shows that even though Comenius Square has a common skeleton with the city, its isolation cannot be overlooked.

Motto: "City of greenery, greenery of the city, city of the city". "The city of Litomyšl is based on modulation, the laws of which have not yet been completely revealed. It is subordinated to its refined relationships and at the same time very much reflects natural conditions. In this respect, the housing estate has an excellent and almost unquestionable basis on which it is possible to further build and develop a strong and fine connection with the city to the extent that it is truly the city itself. It can be quite non-violent integration or assimilation that takes the form of natural development. "

The first stage of the reconstruction included flood protection measures, the settlement of the entire bank (enabling promenades and various recreational uses), the related relocation of utilities and sewer modifications. To better connect the housing estate with the left bank part of the city, a pedestrian bridge was built, which is also a residential bridge. Modifications to the left bank of the Loučná River were not originally the subject of a tender, but the city management decided that due to logical continuity at least basic rough work will be carried out in 2002 - two sidewalks leading from the residential bridge to Smetana's house and warehouse, as well as stairs to the Music Club Boiler room. Retaining walls on the left bank are also repaired. Finishing work and planting of greenery will be carried out in the next stages.

The most important point of the second stage of the reconstruction of Comenius Square, which began in August 2002, is the new transport connection of the housing estate on Havlíčkova Street and the construction of semi-recessed garages with 48 parking spaces. This is also related to the modification of the space behind the store. There is a multi-purpose playground and a garden with a living deck on the roof of the garages.

The start of further stages of reconstruction is conditioned by obtaining a state subsidy. In the next stages, the remaining areas of the housing estate should be modified, including their public lighting and the entrance parts of the houses, the construction of surface state parking lots, waste container stations and the area planting of public greenery. Part of the design of architect Pleskot is also the reorientation of the entrance area of the Dalibor hotel with a connection to the coastal promenade.

- isolation? a closed unit which it does not walk through, but which, on the contrary, it does

- mutual ignoring of the housing estate, the Loučná river and the left-bank part of the city with schools

- both banks of the meadow neglected,

- the bridge meets here in the right place,

- transport connections from one place only,

- poor quality of organization and solution of areas inside the housing estate,

Proposal:
- the aim is to integrate the housing development with the historic city,
- build flood protection measures and inhabit the shores of Loučná (possibility of promenades and various recreational uses),
- build a capacity pedestrian bridge,
- Reorient the entrance area of the Dalibor Hotel with a connection to the coastal promenade,
- cancel the one-point transport connection from Havlíčkova street,
- move the traffic-regulated zone to the level of the Dalibor hotel,
- each house has its own entrance hall containing the basic number of parking spaces (logical distribution of the parking lot inside the block),
- set up a semi-recessed parking space under Comenius Square,
- find the possibility of walking to Smetana's house through the existing houses (effective connection with the historic city),
- change the organization of the internal areas of the housing estate,
- greening solutions - planting mainly tall trees,

Stages of work:
- flood control measures in the form of regulation and cultivation of the Loučná embankment
- new transport connection of the housing estate in connection with the modification of Havlíčkova street
- modifications of all areas of the housing estate, incl. their public lighting and modifications of the entrance parts of houses, construction of surface parking spaces with a capacity of 95 places, waste container stations and planting of public greenery
- construction of the first part of the underground garage under the terrace.